The other game I've been playing is Mass Effect, Bioware's latest "RPG", so far X360 exclusive.

I always have great expectations of Bioware, and they rarely disappoint. While this one has some odd elements and somewhat unfortunate things to it, generally speaking, it's pretty awesome.

It's kind of a mix between two games that I happen to like a whole lot: Knights of the Old Republic, which as we all know was a great Bioware RPG, and Alien Legacy, an old Sierra strategy game. You take your third person RPG-ish game with great dialogue and memorable characters and mix an exploration game into it, where you go to various planets, drop your ATV and start looking for resources and dungeons to explore.

Yep, there's a story as well, that so far seems ok, not anything fantastic. As for the oddities and problems: You've got a third person shooter game instead of your regular RPG. Feels pretty damn odd. Then you have the bouncy ATV from hell driving across mountains mini game, which reminds me of how they made the car sequences in Enter the Matrix (unfortunate, as some you should know). In spite of those shortcomings, there's still wonderful places to explore, great dialogue and intriguing quests. So I'm caught in it, even though it has some sucky things in it as well... 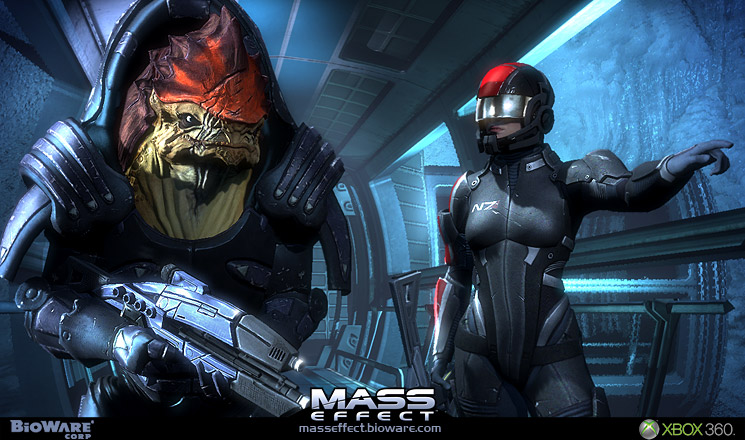 Chances are you didn't know that Yahtzee (of the Trilby games) does speed talking trashy joke (?) reviews of games. It's true. He did one of Mass Effect. See it here:

Now coming to the PC on May 6th. I just might get it for a better control scheme, more save slots and textures that hopefully load completely before being shown. 'Cos it's a really cool story (what Bioware game isn't?).
Long Live the Queen!
Top

I've been playing this game for 1 hour bursts (that's all I can manage) for about the past month, and I think it is great! I have to say I actually like the third person shooting style of the action sequences...although, I haven't really gone anywhere yet (still at the Citadel)...although for some reason i'm a little miffed about the fact that it is early on and I have already gotten the 6 characters for the party...call me crazy, but I'd rather play through and gain allies along the way...meh...if that's all that this game does wrong then it's going to be fantastic

You have yet to experience random planet exploration in the MAKO ATV. I have the feeling that, like everybody else, this is going to rub you worse than getting most allies early. It's fantastic that it's still a good game, for the most part.
Long Live the Queen!
Top

Yay. Resurrecting a two year old thread, but I have to join to this ode to Mass Effect. I played it through some time ago and it was a really great experience.

It was my first RPG that I really played, but I think that the combination of action and traditional RPG elements worked pretty well as long as you remembered to press space during combats and not just blast away. My main gripe was the really poor inventory system.

Have you guys played the sequel?
Do you has what it takes to join the Homestarmy? The guts? The determination? The five bucks? Join today!
Top

Doing my fourth playthrough of the sequel these days. It's a lot more action-ey (third person cover shooter), but it doesn't have the cluttered inventory or the terrible driving. It does have boring planet scanning. The character interaction is wonderful and most of the many mini missions are better and more varied than those in the first game. Very accessible and parts of it are very epic.

Importing your character from the first one is a must.
Long Live the Queen!
Top

I still have this as top of my list of the backcatalogue of games that I need to dig into. I got it some time ago from a friend that couldn't play it on his PC, and knew I liked gaming. The horrible thing is that I need to play it before April as that is when the baby comes and thus my gaming time is slowed to a complete halt.
Currently testing Life version 2.9 (With added second child)
(Beta testing in progress)

Scythe wrote:Importing your character from the first one is a must.

The feedback for the terrible scanning was harsh in the Bioware Forums. After all, it's not a crime to develop a combat-based RPG that you can finish in approx. 35 hours, if it tells you a story like a movie does, with great characters and a full-voiced main char. And ME2 just did that. No need to stretch it artificially.

I did only bother to import 3 different characters from the first, mainly because the gameplay drags too much in ME1 for more playthroughs.
Long Live the Queen!
Top

I got Mass Effect 2 as a Christmas present (from myself!). I'm just couple of hours in, but it does feel quite epic.

I can now understand all the criticism about dumbing the game down, however I felt that the inventory system was horrendous in ME1. It's also nice that I don't have to carry around a Tech guy to be able to hack things.

I've so far enjoyed the game, but haven't really figured out the scanning the planets thing. It is rather silly, but on the other hand the hacking minigames have been better in ME2.

spoilerrific and rhetoric question: The only thing that I don't understand is why neither Shepard or Joker feel that it would nice to know who shot them and their stealthy ship down in the intro. Maybe they're just so busy saving the galaxy again and past is past, or they got both some post-traumatic stress disorder and forgot about it. Maybe it's explained further on. =)
Do you has what it takes to join the Homestarmy? The guts? The determination? The five bucks? Join today!
Top

It will be explained further on. But basically they're too busy to deal with it right now.

I had signed up for Xbox Live and got stuck with a Gamer tag I hated, and didn't want to spend the 800 points to change it...so I nuked my Live account off of my Xbox but was unable to transfer my Mass Effect saved game over to my new account (but had already traded it in at this point)...then when I found out I could carry my character over to the second one, I rebought the game to play through...but this time my character is so much better, plus he has a wicked scar across his face and I altered his face to one only a mother could love...anyways, I was about 2/3 of the way through and ran into the RROD on my xbox...

So...I will probably need to start over again...seen as how it cost just as much to buy an Xbox S, as it would to get mine fixed, and the transfer cable from my old HD to the new S is about $30...which would be the cost of Mass Effect 2...so weighing the options means I will just have to start again...eesh...

I will surely get back to this after I finish New Vegas.
CWF - Safer than Crack, Twice as Addicting
Top

I give you not one, but three Mass Effect inspired songs.

Do you has what it takes to join the Homestarmy? The guts? The determination? The five bucks? Join today!
Top

I just completed the Lair of the Shadow Broker missions and I'm so amazed how everything has a full backstory in this game.

And then there are all those small jokes that are mixed in there between, like there being a Hanaar (jellyfish-looking aliens) juggling act.
Do you has what it takes to join the Homestarmy? The guts? The determination? The five bucks? Join today!
Top

This game has now moved as far as the disc is now placed out of the cover on my desk simply awaiting that I put it in and find time to play... I guess my mission to complete this before the baby comes might be impossible.
Currently testing Life version 2.9 (With added second child)
(Beta testing in progress)

I was playing this about 2 hours ago

I bought Mass Effect 2, but I am waiting until I am through the first one before I fire it up.
CWF - Safer than Crack, Twice as Addicting
Top

I completed my first run of ME2 couple of days ago. Amazing.

I was, however, really disappointed that my female Shepard couldn't romance Miranda. I said no to everyone else, even Kelly. And I have no effing clue what's my dear commander's situation with Liara, even after Lair of the Shadow Broker.

And yes, I know. I'm a sad, sad man.
Do you has what it takes to join the Homestarmy? The guts? The determination? The five bucks? Join today!
Top

...but I like the way you think!
Currently testing Life version 2.9 (With added second child)
(Beta testing in progress)