I'm too tired tonight to write an own description, so I take the one of the developer instead:

Ben's first case finds him in the Florida Everglades, looking for something known as "The Skunk-Ape" which is said to be a local variation on Bigfoot. The Skunk-Ape got its name because of its horrible smell, described as a mixture of moldy cheese, rotten eggs, and dung.

Several park rangers have been murdered, and so Ben is called in to investigate the possibility that the Skunk-Ape is involved. Help him survive long enough to solve his first case!"

The game is quite interesting and funny and if you like the "X-Files", you'll like "Ben Jordan" as well (even if there is no Scully).

There are two versions of "Ben Jordan: Case 1"; the normal version and the Deluxe version with improved graphics, extended storyline, and full voice acting.

Status: We have permission to host it! 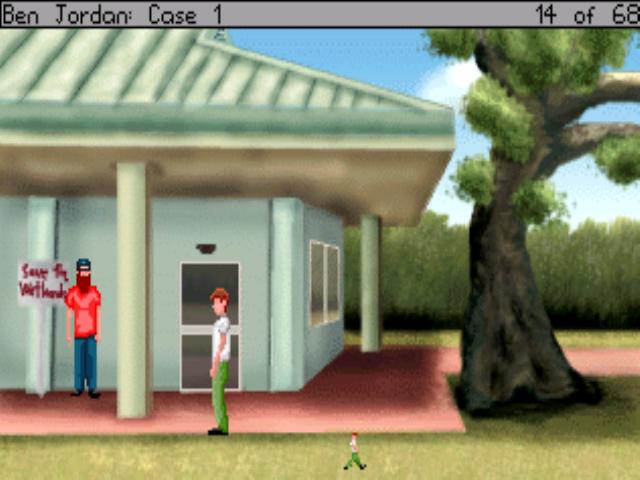 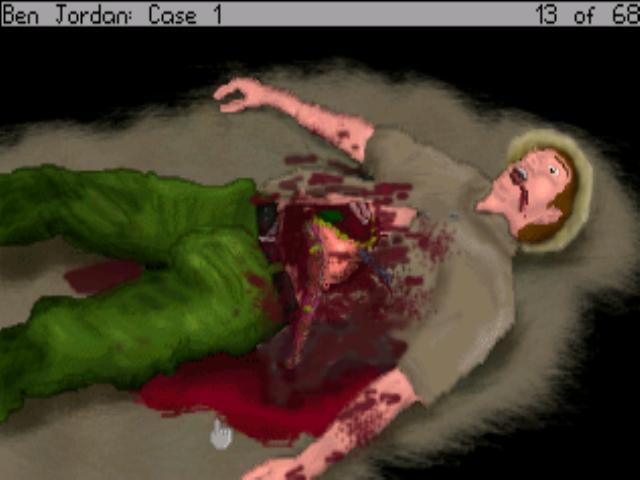 Well, i played only deluxe version and like it. Story is entertaining, dialogues interesting, voice acting amazingly good for a freeware game and atmosphere very movie-like. Unfortunately, there are also some things I dont like. Graphics is too blurred, there are some illogicalities, lack of text makes the game unplayable for less skilled in English and it is a bit too short and too easy. I still like it nevertheless.

If you want to know how big improvement was made to the first version go and play it. Youll see totally different game, different in story, puzzles and - most important - quality.
Top

eMTe said everything that needs to be said: I like the story and the atmosphere as well as the voice acting and the music. The puzzles were logic in my eyes or at least there were hints (like the notepad) what you should do next.

I don't like that there were no subtitles. Even if the voice acting is great, I had problems to understand everything in the last scene (but I died a few times before I found out what to do which left me enough chances to get it all). Also I'm not fully content with the end of the game, because I expected something else and I'm not sure it was totally logical.
Top

Guys, you can get around "no subtitles" by disabling the speech pack. You will miss out on the speech obviously, but I certainly didn't think it was very good. Maybe now I can actually finish the game... I'll try anyway.
Long Live the Queen!
Top

Funny, I have quite a different opinion on some aspects here. For the most part, I liked the puzzles - only a few of them had me thinking a little hard though. Turning off the voices and getting text helped me solve those.

As for the voice acting, I thought it was annoying and confusing to listen to. I didn't care for it at all. Also, it seems to me that the characters in the game were mostly defined by quirky voices, without them they were quite boring. Of course, with them they were totally horrendous. Thank goodness you could turn voices off in the setup! The music was all right, but a little sparse.

I didn't find anything wrong with the graphics at all. Compared to certain other freeware adventures, I thought the graphics were well done. They were kept in a single style throughout the game, which was definitely the best choice.

While the game was short, it didn't feel too short, and the best part was the ending, which was not what you'd think when getting into the game. Surprises are the best!
Long Live the Queen!
Top

Huh. I must meddle with ags setup files more often...

Thank you for telling us! I really missed that...
Top

"Ben Jordan Case 1: In Search of the Skunk-Ape" has been added to CWF. You can download the original and the deluxe version of the game from our game info page:

Just completed this game. And i really liked it, because it has a good story. The puzzle are not too hard and actually makes sense.

Have you completed the original game or the remake?
"As you have noticed over the years, we are not angry people." (itebygur)
Top

I think it was the Deluxe version. It was the newest one.
Sorry for the unsettling post resurrection.
Top

Well, when you finish BJ games, or earlier, try Golden Wake. I'm sceptical about the game, because Grundislav has the same tendency as Dave Gilbert to make his games story-oriented, rather than true games, but maybe you'll like it.

I said it somewhere, but I believe the guys should start a career in literature or comics maybe.
"As you have noticed over the years, we are not angry people." (itebygur)
Top

I like the story in games. Maybe i should just start reading books or watching movies. But there's always something more immersive in controlling the main character yourself.
Top
Post Reply
13 posts • Page 1 of 1